As students in the PCA&D Visual Thinking class know by now, tangents are unintentional points of tension in a drawing (or design layout) where two objects bump against one another or line up side by side.  Every artist falls victim to this once in a while.  When you are involved in a project, tangents are easy to overlook and it is always a good idea to show your work to someone else before committing to a final piece (or before showing your sketch to an art director...or class instructor). There are several types of tangents to look out for, which cartoonist Chris Schweizer has taken the time to point out in the following lecture.  Chris has specifically geared his words toward comic art, but they apply to ANY type of illustration, fine art or graphic design:

A tangent is when two or more lines interact in a way that insinuates a relationship between them that the artist did not intend.

It can create confusion on the part of the audience as to what it is that they’re looking at.  It can cause the spatial depth that one attempts to cultivate through the use of planes to become flattened.  Most of all, it creates a decidedly unwelcome aesthetic response: tangents are just plain ugly.

There are a lot of different types of tangents, as least according to the way I define them.  In order to make it easier on my students when giving critiques, I’ve categorized them and named them.  This may have been done before, but I’ve not encountered it.  My hope is that, by making this “spot-the-enemy” guide, fewer artists will fall into the tangent trap by knowing what to look for. 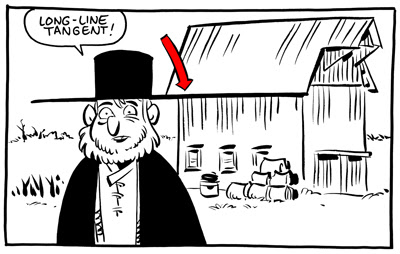 The long line is when a line from one object runs directly into the line of another. This is the tangent that everybody knows.  The one that’s easiest to spot, easiest to avoid.  For a lot of folks, this is the only thing meant when one refers to a “tangent.”  Even in the work of the very best comic artists, a vigilant eye can find the occasional tangent.  Even when a cartoonist is constantly on the lookout, a tangent can slip through. 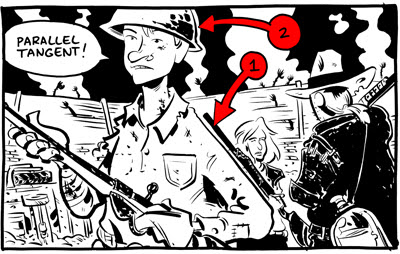 The parallel tangent is when the containing lines of two objects run alongside each other.  This causes one of two negative outcomes.  Either one object becomes “lost,” as the other overpowers it (figure 1), or one object feels strangely contained by another (figure 2).This can be avoided by ensuring that any object that COULD run alongside another is angled at least 45 degrees from the first.The next two are REALLY tough to spot, and most artists have fallen victim to them before. 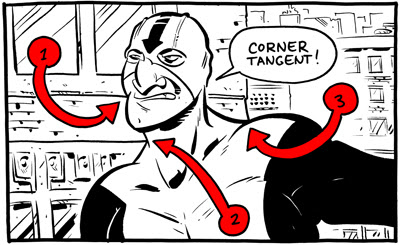 The corner tangent is when two lines in an object meet in a way intended by the artist, but another (accidental) line runs directly into the place where they meet. 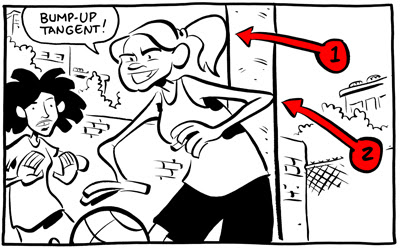 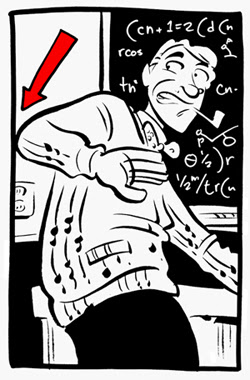 Also, be careful not to let elements of the drawing bump up against your panel borders!  Either give them room to breathe or decisively crop them.  Same goes for letting figures “stand” on the bottom panel border. 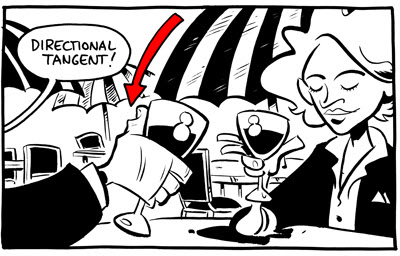 A directional tangent is basically just a long-line tangent that’s been broken by empty space.  Now, this one isn’t always bad – it can, on occasion, be used to draw the reader’s eye through the image on a specifically determined path.